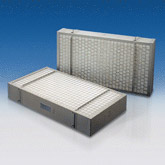 This information will assist airline personnel and other interested parties in understanding the effectiveness of Pall’s aircraft cabin air filters in preventing the spread of viruses and bacteria through an aircraft cabin environment.

What is a HEPA cabin air filter?

The current aerospace industry accepted definition of HEPA cabin air filters is a minimum removal efficiency of 99.97% when tested using a DOP challenge or 99.99% when tested with a sodium flame challenge.1

How effective are Pall HEPA filters at removing bacteria & viruses?

Engineers from Pall's Aerospace group teamed up with scientists from Pall’s Medical group to develop and validate the microbial removal efficiency of aircraft cabin air filters, following standard practices used in the healthcare and pharmaceutical industries.

Viruses can typically range from about 0.01 to 0.2 micron in size, although they may cluster or attach to larger particles.

Similarly, when challenged with the MS2 Coliphage virus, the virus removal efficiency of the Pall cabin air filters is greater than 99.999%.

Note that testing has been performed on full size filter elements at their rated air flow, not just samples of the flat sheet filter media.

Pall cabin air filters have a virus removal efficiency of greater than 99.999%. Airlines who select Pall are using the best available technology for filtering the recirculated air on board their aircraft.

Why cabin air filters do not need an anti-microbial treatment

In free air, most microbes die within a few minutes. Once captured by the filter media, the survival rate of microorganisms in the aircraft environment is very low. Most bacteria require high humidity and a source of nutrition to survive. The conditions typically found in the aircraft recirculation system are 10-15% relative humidity and lack of a source of nutrition.

Is there a danger to maintenance personnel by removing used cabin air filters?

There is no more risk involved in replacing a cabin air filter than carrying out general maintenance on any aircraft part that has been in service for a number of years. Maintenance staff should wear the same personal protective equipment as for other aircraft maintenance tasks which require protection against dust, and per the local regulations.

The used HEPA filter should be placed and sealed in a plastic bag. A specific biohazard bag is not required for disposal of the HEPA filter in most juristictions.