When using fuels or other fluids, it is essential that they are free from particulate contamination and free water.
If the fluid does not meet the required cleanliness standards, fouling and corrosion of the equipment downstream may occur, leading to expensive maintenance costs and reduced component life.   In today’s environment, it is also necessary to recover and recycle the ‘waste’ fluids from the process.

A coalescer is a device for separating immiscible liquids (L/L) or liquids from a gas stream (L/G).

Pall Coalescer Systems
How Does it Work?
Applications

AquaSep® Plus L/L Coalescer System
This is a liquid/liquid separator that has been designed to remove water from a hydrocarbon stream. It does not suffer from surfactant disarming as experienced with conventional glass fiber coalescers.

PhaseSep® Coalescer System
This is a liquid/liquid separator designed for efficient performance in aggressive fluids and where the IFT is low (as low as 10 g/cm). It does not suffer from surfactant disarming as experienced with conventional glass fiber coalescers.

SepraSol™ Liquid/Gas Coalescer
This system removes liquids from gas streams and is designed to handle high flow rates and high concentrations of liquids.

Lucid™ Separator
This system continuously separates liquids from liquids and solids from liquids without the need for additional disposable cartridges.
It treats difficult aqueous and hydrocarbon-based fluids with up to 10% dispersed liquid phase and can operate with relatively high solid concentrations.

How Does it Work? 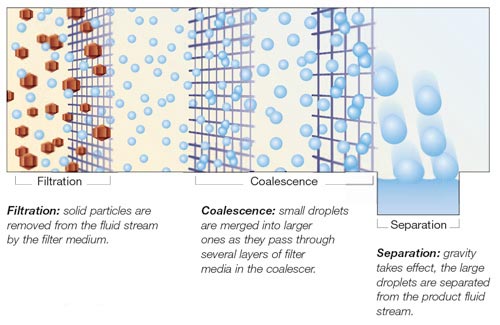 The first step is to remove the solid contaminants using a cartridge filter. Solids can increase the stability of an emulsion and can plug the coalescer, thereby reducing its efficiency. Removing solids will precondition the fluid for optimum coalescer performance.  During coalescence, the droplets to be separated from the bulk fluid are captured by the high-performance coalescer medium. The droplets then move through the coalescer media (with progressively larger pores) and are coalesced to form larger droplets. Lastly, the large droplets are released. After the droplets are released from the media, the phases are separated either by phase separators or by gravity in the settling zone.

Pall’s specially formulated non-disarming medium contains no glass fibers and is less prone to disarming in the presence of surfactants. This means longer life of the Pall coalescers compared to other glass fiber coalescers.

What is Disarming?
Disarming occurs when surfactants (either natural or additives) ‘coat’ the surface of the medium thereby reducing the coalescing properties of the medium and the separation efficiency.

Pall’s coalescing technology can be used in a wide variety of industries and applications.  In the aerospace market, the main application area is for removing water from fuel.