The Pall PhaseSep® Y Series Coalescer is the latest member of the PhaseSep coalescer family and is a high efficiency separation cartridge that is constructed entirely of FDA listed polyolefin material. This allows the PhaseSep Y series coalescer to be used in a wide range of liquid/ liquid separations in the chemical, flavour & fragrance, and biotechnology industries where metal is not compatible and/or where FDA listed materials are required.

The coalescer media contains a three layered tapered pore construction. The emulsion first enters at the inside of the cartridge and passes through a coarse pre-filter layer to extend the service life. The fluid then encounters a fine media layer that initiates the coalescing process starting the enlargement of the droplets. The coalescing process is completed by a coarse media layer that maximizes the coalesced drop size before the fluid departs from the outside layer of the coalescer cartridge.

The presence of difficult to separate emulsions can be a costly problem in the chemical, flavour & fragrance, and biotechnology industries. Liquid contaminants can cause final products to be off-specification, deactivate expensive catalysts, foul contactor and stripping trays, lead to corrosion and delays in downstream storage tanks, and increase the costs for wastewater treatment.

Breaking stable emulsions can be a difficult task depending on the physical properties of the oil, water, and surfactant system.

Important parameters in determining the ease of separating emulsions are the interfacial tension (IFT), difference in density, and viscosity. The IFT is a good way to assess the stability of an emulsion and is a measure of how much energy is required to create additional water /oil surface area. For very stable emulsions, the IFT can be very low and conventional glass fibre coalescers can lose their efficiency when the IFT reaches below 20 dyne/cm.

Compatibility is also a key issue when selecting a coalescer type. Pall offers a wide range of coalescers including various polymers and fluoropolymers.


The Pall pre-filter and horizontal liquid/liquid coalescer system is depicted on the last page. The first stage consists of a pre-filter housing that is used to remove solids from the inlet emulsion stream to protect the coalescer and ensure long service life. The pre-filter also functions as a pre-coalescer and starts the fine droplets in the emulsion on their route to forming larger intermediate drops that continue to enlarge in the coalescer medium.

In the coalescer housing, the liquid/liquid emulsion enters the PhaseSep Y series coalescing element and flows inside to outside. Dispersed phase droplets suspended in the continuous phase merge together in the fiber medium, or coalesce, as the emulsion moves through the coalescer medium.

The large coalesced droplets of the dispersed phase leave the coalescer cartridges and are separated by the difference in density between the two phases in the settling zone of the horizontal housing.

The drops collect in a sump where an interface level is monitored, typically with automated level control and valves. Depending on the difference in the density between the two phases, the sump can be located on the top or the bottom of the coalescer housing. 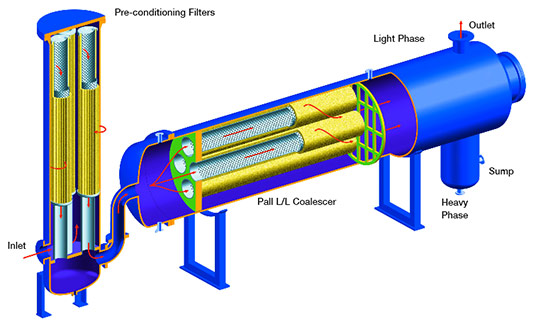 Note: each application for the PhaseSep Y Series L/L Coalescer should be reviewed by Pall Corporation for technical feasibility.

The PhaseSep Y series coalescer is compatible with many corrosive solvents encountered in the chemical, flavour & fragrance, and biotechnology industries including ammonia, urea, acids, caustics, brines, amines, alcohols, and many other organic solvents. For compatibility information with a specific chemical, please contact your local Pall office.