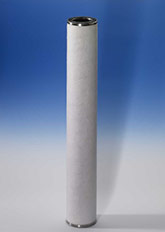 Pall Corporation’s staff of research scientists and engineers have designed these coalescers that change the way gas streams are conditioned.

The SepraSol Plus media can process several times more liquid per unit area of media than conventional media and often eliminates the need for upstream bulk separation equipment like mist eliminators and vane separators.

The SepraSol Plus media is supplied in a large flow, high performance 6-inch diameter cartridge that can economically treat large gas flows in applications that require a high degree of protection from both solids and liquids including:

One major reason why coalescers do not function properly in the field is because of an underestimation of the liquid influent concentration to the coalescer. Simply stated, the more liquid charged to a coalescer system, the more coalescer media required. If the coalescer is challenged with too much liquid, significant quantities of liquid will become re-entrained in the effluent gas, and downstream equipment problems will continue to occur.

The Pall SepraSol Plus media is able to handle higher levels of liquid per unit area and requires significantly fewer cartridges to remove liquid and solids from gases. This is illustrated in Figure 1, which compares the SepraSol Plus liquid/gas coalescer with a conventional media pack. As the liquid load is increased, the number of cartridges required to remove the liquid also increases.

With conventional media packing, the cartridge requirement may become uneconomical once the liquid concentration gets above a few hundred ppmw. The SepraSol Plus liquid/gas coalescer economically removes liquids with a concentration in the thousands of ppmw, often eliminating the need for an upstream bulk separator.

The SepraSol Plus Liquid/Gas Coalescer – no longer just for polishing

Generally, if the liquid influent concentration was greater than a few hundred ppmw, a bulk separator such as a knock-out drum, mist eliminator, or vane separator was required upstream of the coalescer to remove large liquid droplets and a coalescer would be used to remove the small droplets (less than 5 micron).

All of Pall’s SepraSol and SepraSol Plus liquid/gas coalescers receive the patented oleophobic/hydrophobic treatment. Chemically treating the coalescer lowers the surface energy of the media and promotes rapid drainage of the coalesced liquids. This significantly increases the amount of liquid per square foot of media the coalescer can handle.

Figure 2 shows the effect of the benefits of both the oleophobic/hydrophobic treatment and the SepraSol Plus liquid/gas coalescer compared to a coalescer with conventional packing and no chemical treatment.

Note: under the process conditions stated, the SepraSol Plus liquid/gas coalescer with chemical treatment requires a significantly smaller assembly under maximum liquid loading conditions than the untreated coalescer with the conventional pack design. Assembly diameter is directly related to the overall installation cost.